You’ve undoubtedly seen an onslaught of red squares in your newsfeed this week as the Human Rights Campaign (HRC), a national LGBT rights organization, has encouraged supporters of marriage equality to display their politics via their profile photos. A red and pink version of the ubiquitous HRC logo has been consuming Facebook alongside many creative reinterpretations, including my personal favorite — the Tilda Swinton one. (Is it a political commentary? Is it a meta meme? We may never know).

But what do all these symbols mean? And what’s the difference between = and > and Paula Deen? I asked several Stanford students to share their thoughts on what these images mean to them.

I have the ‘greater than’ symbol, as a symbol of solidarity with all those whose relationships and models of community and care are excluded from the state’s recognition of marriages, and a statement that our queerness neither begins nor ends at assimilation.  Marriage is not a ‘first step’ that has the potential to launch more conversation; it is, right now, an eclipsing step, that has overdetermined LGB politics in the US and erased much of the history of queer resistance pioneered by people of color, low-income queers, and trans* people.
—Alok Vaid-Menon, ’13

END_OF_DOCUMENT_TOKEN_TO_BE_REPLACED

A Breakup Letter to Stanford University

you are eighteen — give or take a few
shots of espresso and one night stands —
and you are sandwiched in the backseat
of the car with the six suitcases you somehow convinced your mother
to let you pack for college — let’s call it,
being upfront to your roommate that you are
coming with baggage

and you never were one for cliches, but you felt
part of something bigger than yourself,
your parents — called it “becoming an adult”
but you called it staying out past your bedtime dancing
called it holding his hand on the street,
called it safe, and sometimes even
freedom

END_OF_DOCUMENT_TOKEN_TO_BE_REPLACED

Looking for a meaningful way to spend your summer? Stanford activists share their most memorable experiences.

I worked as an intern within an educational non-profit focussed on providing one-on-one tutoring to underserved youth in various cities across the US. I learned a lot about the maintenance of non-profits and got to meet cool writers, educators and teachers. 826 National is located in SF, which allowed me to meet tons of amazing people connected to the organization.

My job was twofold. I was teaching in a school for abandoned children(mostly girls) started by the organization, and also helping the organization on the administrative side by writing grant proposals etc to fund future projects. One example of the latter is a proposal for a mobile computer lab that would teach children the basics of computers. I thoroughly enjoyed interacting with the children from the home, teaching them, playing with the younger ones and chatting with the older girls.

I went door-to-door canvassing for a farm bill to be passed or rejected in congress. I loved getting updates on the radio from our own lobbyist about what was happening nationally while we were working.

I composed literature reviews for academic papers about compassion, wrote lay press articles on compassion and social connection, did publicity, and brainstormed initiatives. It is a great place that combines research with education and social change initiatives. END_OF_DOCUMENT_TOKEN_TO_BE_REPLACED

My Summer in Cape Town: Or I’m Sorry for Using You

They will ask you
Whether your project can inflict ‘harm’
And you will respond: “minor discomfort” to expedite the review process

Her name is Cym,
And the arc of her smile mirrors her painted eyebrows,
On Mondays she asks you what you did over the weekend.
You do not tell her.
You are guilty of the conversion rate, how you can afford a club, a skin, a language that she never will.
She wants to know what it feels like to live in America
If you have a handsome boyfriend there who will buy you dinner sometimes

In your field research class they will teach you about the importance of obtaining consent.

This poem, “Marriage”, also known as “Queer Rage”, is a critique of gay marriage politics as a strategy of liberation.  Obama’s endorsement of same-sex marriage (or anyone else’s) is not where the struggle ends, or even begins, really.  In the piece we call for a consideration of race, class, and other systems of control that complicate and intersect with queerness.  We also point to the increasing corporatization and overwhelming whiteness of gay marriage politics.  Overall, we point to a more critical consideration of violence and material oppression that is linked to queerness, and how insufficient marriage equality is in this regard. This piece was performed by the Stanford Slam Poetry team at the 2012 College Unions Poetry Slam Invitational.   Video and transcript below.

END_OF_DOCUMENT_TOKEN_TO_BE_REPLACED


With Stanford Students for Queer Liberation, I invited Zach Schudson to come and perform in Terra House during Winter Quarter. I stumbled on Zach’s work through Facebook and was immediately inspired by his body-positive, queer-positive message and the way he was using mainstream pop music to communicate radical critiques. In person Zach was just as eloquent and charming. His performance was a bunch of fun! I wanted to interview Zach to hear more about his thoughts behind the music.

AVM: Tell us about yourself. Who is the real Zach Schudson?
ZS: This is always the most intimidating question on online dating sites and so I always make a joke. I guess that’s a good summary of me though. When people ask who I am, I make a joke and avoid the question. I’m totally comfortable with that. I think confidence and clear-cut answers are overrated. Placing excessive value on them privileges a kind dominant, go-getter attitude that just does not work for me. I like spinning my web out of avoided questions and humor-based defenses. My friend Sarah recently described me really well: “You and I are a lot alike – really chill about other people and really neurotic about ourselves.” My Myers-Briggs type is INFJ, for those with some interest in personality psychology.

END_OF_DOCUMENT_TOKEN_TO_BE_REPLACED 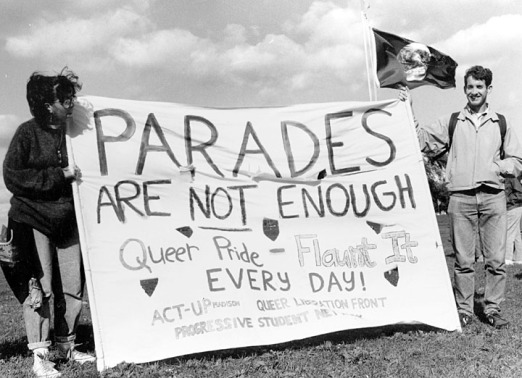 Note on terminology: Throughout this text I will be using the word ‘queer.’ I do not mean to use ‘queer’ as a derogatory or negative term, rather I use it as an umbrella term for sexualities and gender-identities that are not heterosexual (when one is attracted to members of the ‘opposite’ ‘sex’) or cisgender (when the gender someone is assigned at birth aligns with their psychological feeling of their gender).

But ask yourself: What would change in your life right now if the Supreme Court ruled that banning same-sex marriage was unconstitutional and that every State in the United States now had to legalize same-sex marriage?

My guess is that after your cried tears of joy, felt a delicious burst of self-affirmation in your heart, texted all your friends, and kept the news on all night, you would recognize that very little in your day-to-day life would change. END_OF_DOCUMENT_TOKEN_TO_BE_REPLACED

Why Should I Care About Trans* Awareness Week?

1. Chances are you know very little about transgender experience

You may  have several gay friends and resonate deeply with their struggles. You may identify as an ‘ally,’ and believe that all gay people should have the right to marry and serve in the military. Yet, I doubt that you know much about transgender identity, politics, and the experience of transgender people in our country It’s not your fault. Openly trans* people make up a very small percentage of our population. You don’t learn about trans* people in class. There are only a few out trans* students at our school.  This is why it’s important to have a Transgender Awareness Week. Most people (even in the ‘LGBT’ community) are blithely ignorant about transgender issues. In coordinating a week dedicated to trans* experiences we highlight narratives, issues, and perspectives that are often lost or neglected in our dominant culture. END_OF_DOCUMENT_TOKEN_TO_BE_REPLACED

Looking for a meaningful way to spend your summer? Stanford activists share their most memorable experiences.

I helped in the office by responding to prisoner mail and conducting research on legal cases, prisoner rights, and state correctional budgets. I enjoyed being in DC with top lawyers working on prisoner rights issues.  I was able to visit local jail facilities with lawyers and attend congressional hearings featuring Justice Breyer and Attorney General Eric Holder.

I worked mainly in APEN’s Development Office and learned a lot about the work that goes into fundraising for a non-profit organization and grassroots fundraising techniques. This organization generally worked with the older immigrant population in Oakland’s Chinatown and the Laotian community in Richmond, California. In the past, they had campaigns to prevent Chevron from expanding their refinery in Richmond (which they succeeded to do!) When I worked there, there were efforts to teach the very pivotal population of Oakland’s Chinatown to vote. Near the end of my time that summer, APEN was starting an effort to create a coalition among the various environmental justice organizations in California to develop a grassroots effort to combat climate change and affect state policy. Also near the end of my time there, APEN was starting a campaign to combat the Dirty Energy Proposition (Prop 23). As an intern, I wrote letters to potential donors and allies and was able to attend many, many meetings–from attending a workshop for the elderly in Chinatown to listening to amazing Asian American activists speak about their experiences during the 1960s in APEN’s partner organizations in San Francisco. I was able to attend many rallies and was able to do precinct walks (related to Prop 23). END_OF_DOCUMENT_TOKEN_TO_BE_REPLACED

The street signs of Brick Lane, a historically South Asian immigrant neighborhood, are in both Bengali and English. The street is alive with art markets, flea sales, and food vendors. Indian restaurants decorate the street with their tantalizing sweets and succulent, spicy fare. There are saree shops, mosques, ethnic grocery stores. Older brown men play karamon on the sidewalk, eating their samosas and stamping the ground in their Bata chappals with joyful exclamations of “Shabash!”

I am standing in line for the American Apparel Flea Market. There are almost 100 people waiting outside of the door and all of them are White. They are the types of kids you’d call ‘individualistic.’ Yes, hipsters – those ironic, well-dressed, artsy types magnetized to American Apparel (even though it has become mainstream) — have colonized the streets of Brick Lane. In the alleys by the saree shops there are vintage and thrift stores. On the walls of the abandoned warehouses I see advertisements for underground parties and alternative bands.

The brown bodies walking on the streets stare at me suspiciously. The white bodies standing in front of me in line peer at me curiously. Both are surprised to see me. As a record store begins to blast new indie music from its speakers and the White, angst-ridden voices join the sounds of tabla and sitar I ask myself: What am I doing here?  END_OF_DOCUMENT_TOKEN_TO_BE_REPLACED